Kwinana Plant part of the fabric of Australia’s water infrastructure 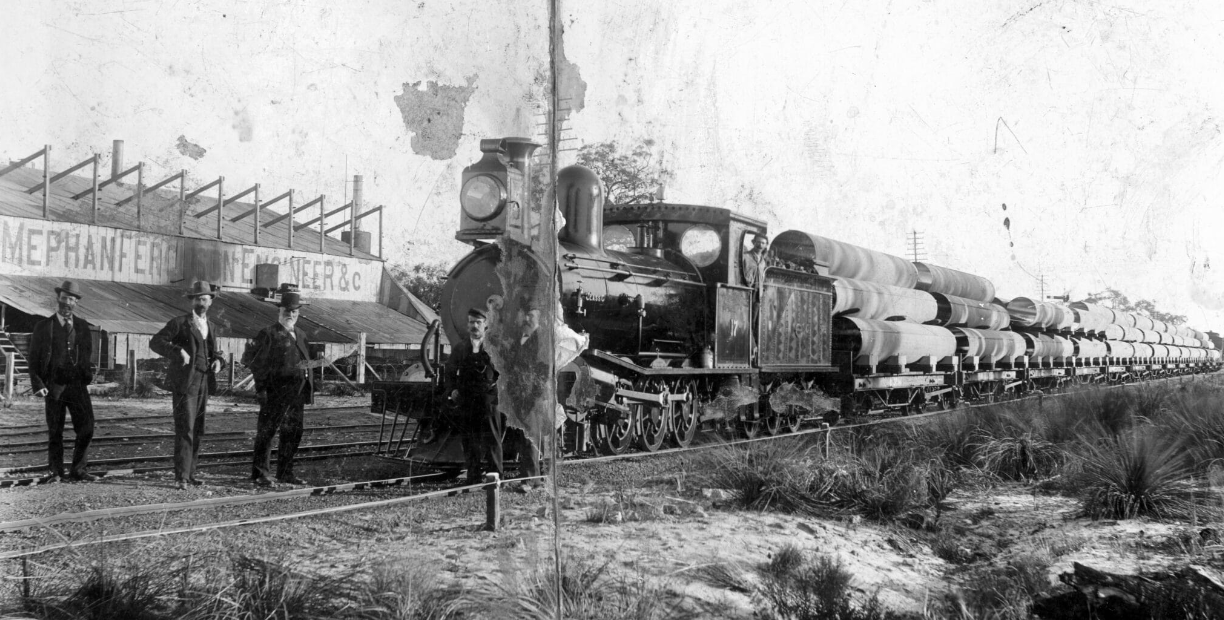 Steel Mains’ history is fundamentally linked with the development of Australia’s water infrastructure since the 1800s.

Constantly at the forefront in terms of developments in the water industry, Steel Mains has evolved alongside the water needs of Western Australia.

The original pipe making site in WA was Mephan Ferguson’s Pipe Works. Located in Falkirk Park Estate – near the Maylands Railway Station – Mephan Ferguson’s operated from 1890 until the early 1900s, when a new plant at Salvado Road, Subiaco, took over until the 1980s.

While operating as Mephan Ferguson’s, the company was responsible for supplying pipe to the Goldfields Water Supply Scheme – a 566 km pipeline that runs from the Perth Hills all the way to Kalgoorlie. Also known as the ‘Golden Pipeline’ sections of this pipeline are on the State Registry of Heritage Places and, in 2011, the whole pipe was placed on the National Heritage List.

In 1960, the Kwinana Plant was established, opened by the Premier at the time, Sir David Brand. The manufacturing of water pipes was consolidated to the Kwinana site once the Subiaco site closed down, and the plant has been producing pipe ever since.

Once again evolving to meet the needs of the country, the plant established the capacity to manufacture gas pipes in the 1970s as a way to supply the Dampier Perth pipeline. Other projects benefitted from this move, typically major projects for Victoria’s Gas and Fuel Corporation, and the Pipeline Authority of South Australia. While gas pipe manufacturing ceased at the plant in the 90s, the plant continued manufacturing water pipe.

“Steel Mains is proud to continue its long history as an Australian manufacturer and its role in supporting the world-class water infrastructure that supports the Australian local communities,” Steel Mains CEO Dean Connell says.

In 1999 the plant was upgraded, allowing it to support the completion of ever more fundamental pipe infrastructure for the country. The installation of a spiral mill allowed the plant to provide for the Stirling—Harvey trunk main, a 106km DN1400 which feeds the Integrated Water Supply Scheme that feeds all of Perth. Beyond this, the plant has provided section replacements for the Golden Pipeline, as well as supplied for Perth Desalination 1 and 2, many metropolitan pipelines for Perth’s Water Corporation, and 90 km of pipe for the Wentworth to Broken Hill Pipeline in New South Wales.

The Kwinana Plant has provided over 60 years of manufacturing support to the development of water and gas infrastructure across the country, and is embedded in the history of the Water Industry in Western Australia. Through the plant’s constant operation, Steel Mains has provided support for industry in Western Australia, and the community around it.

Overall, Steel Mains has been manufacturing pipe for Australia for over 140 years, a legacy that continues today. In 2020, the Kwinana Plant celebrated 60 years of manufacturing, a full half of the lifetime of Steel Mains and its predecessors.

Steel Mains has completed a number of upgrades at the Kwinana Plant over the years to ensure that the facility is able to continue providing new designs, innovative solutions, and reliable pipes to contractors across the country. With a focus on sustainability, the company now produces pipelines with a projected life of over 150 years, ensuring the water security of Australians.

This article is featured in the September edition of The Australian Pipeliner.